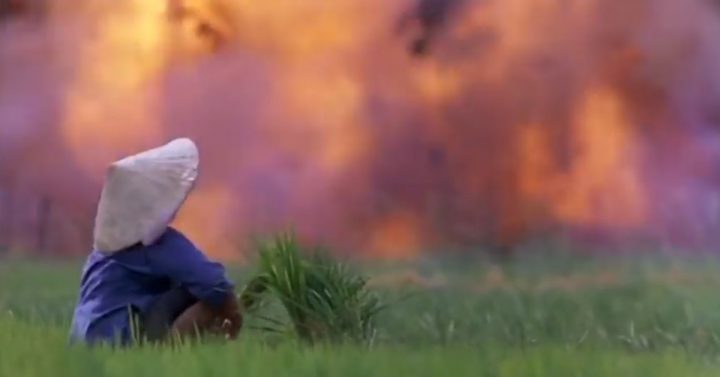 There’s a famous scene in the movie “Good Morning Vietnam” where the classic Louis Armstrong song “What a Wonderful World” runs as the soundtrack behind grisly scenes of a Vietnamese village under attack. Huts are shelled with mortars and people mowed down by machine gun fire. The juxtaposition of music against the violence of war and civilian collateral damage evokes a surreal, horrific perception of reality.

This is what Susan and I walked through. It was this sense of being on the outside of the world’s daily routine. We were disconnected observers, stuck in a place of horror as we watched everyone go about their business, oblivious to our shock. Susan and I were immersed in sadness so tangible it distorted our perception of reality. My normal Sunday routine at the church where I worked as an assistant pastor felt like an out-of-body experience. As a pastor, I’ve walked through family tragedy with others, but never calamity like this and never so close personally. There is no question that this was the most emotionally heavy day of my life.

I was thankful for our supportive church as things unfolded. It was in that faith community that angels began to come out of the woodwork.

I had hoped to get on a plane that day and fly out to San Francisco, but I was unable to get a flight on such short notice. So I flew out the next day, Monday.

Monday started very early. I booked the earliest flight possible. My friend, Dave, drove me to the Fort Lauderdale airport 60 miles away. It was the only flight I could get.

Dave and his wife, Lyette, are people of action. There is never a problem too big for this couple. They always have a plan (when I wasn’t looking, one of them slipped cash into my suitcase). I cried at their dining room table, and they cried with me and prayed and gave me a pep talk that carried me through the first 24 hours in San Francisco. When my faith ran down I called Lyette, and she nourished my soul with faith-filled words.

My cross-continental flight put me in San Francisco before lunchtime Pacific Time on Monday. When my cell phone picked up a local signal, I noticed I had two new voice mails. The first one was from Susan. I didn’t listen to it. I just called her back.

Susan was close to hysterical. Charity’s original version of Allie’s condition was pretty bad. But she gave the impression that Allie would most likely be out of the hospital in a week or so and, if everything went well, I would bring her back home to Florida with me.

“Allie’s in a coma!” Susan cried. “Charity didn’t tell us it was this bad!”

“Okay, honey,” I tried to console her and take control of the conversation. That was typical of me in the rare occasion that Susan expressed this much emotion. “Maybe I’ll have to be here a little longer than we hoped. But we’ll figure this out, and I’ll bring Charity and Allie home.”

Well that’s a little extreme, I thought. Charity would have told us this, wouldn’t she?

“The doctors sat Charity down and explained it to her very carefully this morning,” Susan said.

“And Timmy’s been arrested,” Susan added. “I called Ruth, and she’s beside herself.”

Susan and Ruth had become friends as they shared their grandmother activities together before Allie left Florida.

“I think we expected that to happen, honey,” I said.

The second voice mail from John, Timmy’s father. I decided I better listen to this voice mail first.

“Bryon, please call me when you get this,” I heard the recording of John’s voice say.

I called him, and when he answered, he was frantic. “I can’t believe he did this! I hope that kid rots in jail!”

Those were understandable sentiments. But strangely, instinctively maybe (or maybe I was still in shock), I told him, “John, if there’s anything Timmy needs right now, it’s his dad. You need to be the best father to him you can be.” Out of nowhere, the pastor in me showed up like this was somebody else’s problem rather than our own, shared crisis. I discovered early that no matter how angry I got, I didn’t think of Timmy as evil. I only thought of how hurt Allie was and how much she needed her grandparents right now. I wanted to make sure that John and Ruth, as Allie’s grandparents, had as much access as possible because Allie would need them, too. They were not responsible for the harm inflicted, but they could absolutely be a part of giving Allie the best life possible. I didn’t know it yet, but Susan and I were going to need as many angels in our corner as we could get. I didn’t want them to ever feel blamed by us for the actions of their son.

I took public transportation from the San Francisco airport to California Pacific Hospital. Usually I love San Francisco and the adventure of making my way across town on trains, streetcars, and buses. But on this Monday morning, I was still in a daze.

Arriving at the PICU

I checked in with a hospital volunteer and found my way up to the Pediatric Intensive Care Unit (PICU).

As doctors examined Allie further, they discovered that she had a broken collarbone, a broken rib, and a broken fibula. Each injury was in a different stage of healing. Allie received each of these injuries at different times. When questioned by the emergency room doctor, and later by police, Timmy calmly confessed to physically abusing Allie for over four months. Witnesses to the confession said he showed little emotion as he unburdened himself of what he had done. “He seemed relieved,” the ER doctor later told me. “Strangely, a peace seemed to come over him.”

I was not ready for what I was going to see. Apparatus on shiny chrome stands surrounded Allie like a crude protective fence. She was in a hospital bed that looked much too large for her. Her head was completely wrapped, turban like, in gauze to hold the electroencephalography (EEG) nodes glued to her scalp in place. She lay under a heating lamp with feeding tubes in her nose, breathing tubes in her mouth, and intravenous (IV) lines running from her little hands to a bags on stands. A little cube shaped machine on a pole pumped liquid nutrition into her stomach through a tube in her nose. On one side, was a machine that monitored her temperature, blood pressure, pulse, and respiratory rate. Next to the machine that monitored her vitals, a heating lamp kept Allie’s temperature at 98.6. Allie’s little body was not maintaining core temperature on its own. On the other side of Allie was the EEG monitor. Finally, there was a machine that pumped air into Allie’s lungs. She hadn’t breathed on her own in over 36 hours.